The Bird's the Word

Well, they're dancin' this bird in the east and the west
Make this dance and you'll look the best
Haven't you heard about the bird?
Don't you know that the bird's the word?

Inspired by the Rivingtons' classic 1962 song (better known as the 1963 cover by the Trashmen), Rock Block's summer 2017 tournament is a double-round-robin tournament. Each player will play each other player twice, once as a challenger and once as a defender, with no possibility of draws. Whoever has the most wins at the end will be declared the winner and receive a prize! A few concerts will happen each week over the course of August, with a winner expected in early September.

To join the tournament, first join Rock Block. For more information about the game, see How to Play.

Congratulations to Steve West, champion of the summer 2017 tournament!

Steve won the most concerts in the double-round-robin tournament. 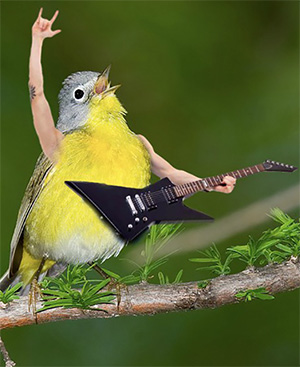 Concerts: "The Bird's The Word" concerts will be started by Scott using randomized terms, staggered over the course of several weeks. Each player will "challenge" each other player a single time, thus resulting in two concerts between each pair of opponents. The Overtime play rule will ensure no draws, but the other play rules and the artists in each concert will be randomly selected based on what each pair of players has available to them. These concerts will use the None trade rule and time out only after a full seven days. Winning or drawing in these concerts will not result in ranks of new artists in the Collection Guide, as participation in the tournament already does so (see Prizes below), but they will count towards achievements such as "win fifty concerts."

Scoreboard: As the tournament progresses, the outcomes of concerts will gradually fill the scoreboard, indicating who won each concert. Click on the status of any concert in order to visit that concert.

Victory and Tiebreaking: After all concerts have completed, players will be ranked according to how many victories they achieved in these concerts, with the winner being the player with the most victories. Any ties will go to whoever won against more individual opponents, or failing that, to whoever won more of the head-to-head matches against each other. If a tie still cannot be resolved in this manner, then a single randomized concert will determine the ranking of tied players.

Every participating player will also receive a free copy of the Rivingtons in their label, and unlock the Overtime play rule if they don't have it already.

A "participating player" is defined as playing at least one turn in a "The Bird's The Word" concert.

These are all "The Bird's the Word" concerts in chronological order. Bold titles are still being played.