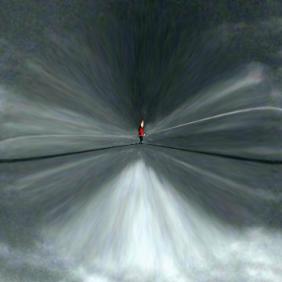 Welcome to Celebrity Goo Game, where famous faces have been distorted into caricatures, such as the example at right. The objective is to identify as many of the celebrities as you can.

You'll earn points for every goo that you solve. The more points that you acquire, the higher you'll place in the Current Scores. On the final day of the current season (September 3), whoever has the highest score will win the game and receive a prize, and then the game will start over again with the scores reset.

Alternative spellings are usually accepted as answers. For a complete list of what guesses are accepted or not, see the Advanced Rules. If you enter a spelling that is not recognized, your guess will be marked "pending" until Scott has a chance to review it and deem it correct or incorrect.

A new goo is published every day, except for four days a year: the final day of each season, which is always a Saturday. Once published, each goo will remain active for seven days, during which time players may enter guesses. After seven days, the goo will expire and the answer will be revealed. If a player solves a goo after the end of the season, it does not count for points.

Each goo solved earns two kinds of points for the player. Normal Points are earned at the rate of N for solving the Nth goo of the season. Bonus Points are secret, a random value from 1-50 for solving each goo, that is only visible to you when you earn them.

Goos created by players (see below) are also worth points: On the day that they are published, they earn as many points for the creator as she or he would have earned by solving the goo.

On the final day of the current season (September 3), the player with the highest score will be declared the winner, and receive a $50 Amazon gift card by email.

In the very unlikely event that multiple players are tied with the highest score, the one with the highest combination of goos solved and goos created in the season will be declared the winner (and any further ties will go to the player with the lowest average solve time across the season), but any players tied for the highest score who are not declared the winner will receive a $50 Amazon gift card as a consolation prize. The maximum sum of all prizes is $250 per season, after which no further prizes will be given. The scores are compared as of midnight, so any guesses made after that time will not count. If there are pending guesses at midnight, the winner will not be declared until the pending guesses have been resolved.

After a winner is named, the game starts over again the next day (Sunday) with everything reset: Scores are all returned to zero.

To help him run the game, Scott invites players to create their own celebrity goos. After a player submits a goo this way, Scott will review it to style the text like the rest of the site (and on rare occasions alter the goo's solvability if he thinks it's warranted), and then the reviewed goo will enter the queue for future publication. Each goo published is worth points to the creator, the same number that s/he would have earned by solving it. Players can submit as many goos as they wish, and player-created goos are subject to the same randomized process as all goos (the site chooses each day's goo at random with an emphasis on variety of category and difficulty).

Players cannot guess or solve their own goos. Scott solves these player-created goos himself for fun, but does not earn points and cannot win a prize. For more information, visit the page for creating a goo.

Besides winning the game, a number of other achievements are honored, such as solving every goo in a single season and being the only player to solve a particular goo. There's also a Hall of Fame that honors the game's very best players.

Some rules in the game are too obscure to list here, since they come up only under very rare circumstances. See the advanced rules for a complete list.

Celebrity Goo Game is run by Scott Hardie, who reserves the right to take any steps to preserve fairness if cheating is apparent, an error occurs on the site, or other unusual circumstances occur. The game is part of Funeratic, a web site with other games, contests, movie reviews, blogs, and a discussion forum. A Funeratic account grants access to all sections of the site.

Get started with the current goos. Good luck!