This article was written in February 2006, when David was originally inducted to the Hall of Fame, at a time when there was only one inductee per year. In February 2020, his year of induction was retroactively changed to 2004, his first year of eligibility. 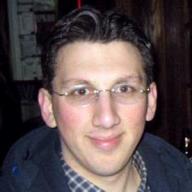 Maybe it's because he was there at the inception. Maybe it's because he and Scott talk about the game so often. Or maybe it's just because he's so damn good at it. Whatever the reason, for eight years David Mitzman has remained one of the most central players of Celebrity Goo Game, very closely aligned with the spirit of the game. It doesn't hurt that he remains one of the game's most enthusiastic fans: In the early years, David often sent Scott a series of instant messages in the minutes before each goo was published to ask if it was done yet, and when Scott said that asking didn't make him finish the goo any faster, David joked "Sure it does, just like tapping the elevator button." (He was right.)

In the spring of 1998, Scott Hardie and Matthew Preston were college dormmates, and David Mitzman lived across the hall. Like several neighbors that semester, David was invited in passing to guess at Scott's new web game. But a funny thing happened: Despite moving to different parts of the country, David and Scott stayed in touch, and David gave the game another try in early 2000. By that summer, he won the game, and he hasn't looked back since: Twice a winner, twice a runner-up, two flawless seasons, one Golden Imelda, and a perennial presence among the top five scores of all time. David is unquestionably among the game's most accomplished devotees, and to this day he re-dedicates himself to winning each new season.

David's enthusiasm for the game has inspired his friends to play: Scott Horowitz has similarly earned one of the all-time high scores, Todd Brotsch won a season in 2004, and Steve Elliser tried the goo game after winning a different contest on the site. David has suggested innumerable small changes on the site and even sent Scott php samples to show how different features could be added. He has also consistently helped Scott identify errors and alerted Scott when a goo failed to publish correctly. And that's not counting the goos he inspired: Rebecca Romijn-Stamos, Eric Bloom, Jon Anderson, Jason 'Wee Man' Acuña, J.R. Ewing, Mark Hamill, Rudy Giuliani, Bernhard Goetz, Kozo, Karel Roden, Kristen Bell, Scott J. Horowitz, Rick Springfield, Howard Stern, Nick Nolte, Cybill Shepherd, Phil Spector, Jack Nicholson, Brody Dalle, Dennis Rodman, Cameron Diaz, Zero Mostel, Alan Rickman, and Marcia Clark all became goos (directly or indirectly) because of David. Whether the mark of a player's greatness is his influence on game history, the volume of his accomplishments, or the consistency of his skill at the game, David Mitzman excels at all three. He is a worthy and overdue inductee to the Hall of Fame.

David's comments: I'm very honored to be placed in the Hall of Fame this year. I remember last year the decision coming down to either me or Denise and she was just the better decision for the last entry. I remember when I started playing; it made look forward to every Sunday night around midnight so I could submit my guess. When the game switched to a more intense daily format, I found even more enjoyment in playing even though it's a bit more stressful. I can only hope the game continues for a long time and since I've been playing steadily for the past 6 years, I can't imagine not having it around.