This article was written in February 2008, when Lori was originally inducted to the Hall of Fame, at a time when there was only one inductee per year. In February 2020, her year of induction was retroactively changed to 2007, her first year of eligibility. 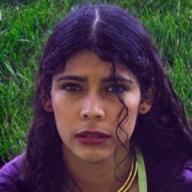 No phrase in Celebrity Goo Game elicits as many varied reactions from players as a goo "requested by Lori Lancaster." Some appreciate the challenge and others resent it; some appreciate her unpredictability and others resent it. No goo gets players fired up like a "Lori goo," and she's the only player to have an entire class of goos named after her in game jargon. Lori's personal stamp on the goo game has always been as unique as the woman herself, and she's been one of the most influential players to shape the game in its history.

Joining the game at the start of Round II, Lori quickly got into the game and won, becoming the only player to interrupt Matt Preston's winning streak during the game's first two years. She won in the same season she joined, a feat that no other player has accomplished since. Her split-second victory over Matt Preston and Kelly Lee was quick and decisive, but Lori came to think about the game like Scott Hardie: The fun of the game is in guessing goos, not winning the competition. Declining to compete hard for victory again, she nevertheless remains one of the highest-scoring players overall and has placed high among the finalists in many seasons since.

If Lori is in the game for fun, nothing makes it more fun than shaping it with her own favorite celebrities, drawing from her Mexican heritage, lifetime in Chicago, Japanese and German fluency, or passionate interest in anime, photography, science fiction, and music. Lori has personally created 28 goos to date, almost three times as many as any other player, with another 9 pending on the date of her induction, and just as many goos have been inspired by her. Her request for Mexican actress Lorena Velázquez (Lori's birth name) inspired "Don't I Know You From Somewhere?" Week and its sequels, featuring celebrities with the same names as players. When the answer to one of her requests came out, she helped shape the policy that an exposed answer is shared among all players rather than the goo being canceled and replaced. Some of her requests have become infamous as the most difficult goos in the game, obscure anime figures like Yôko Kanno and Mitsuko Horie whose goos are so hard that Scott uses them to bring a season to a quick end, but Lori wants players to guess them correctly and makes them solvable with some online detective work. She also balances them by requesting fun, widely-known celebrities like William Shatner, Ron Popeil, Daniel Radcliffe, Colonel Sanders, and John Williams. There's no request like a Lori Lancaster request, and no goos create as much controversy or discussion.

Since joining the game, Lori has been among its most consistent supporters and enthusiasts, rarely going more than a week without a guess for ten years. She has introduced friends to the game like Dave Stoppenhagen and Andy Hubbartt, and been a fair-minded participant in many major discussions that shaped game policy. Many players have influenced the game, but no one has done so in as uniquely personal a way as Lori, breaking game boundaries with her unconventional requests and winning support for the kind of goo game she wants to play. For all these achievements in her first ten years in the game, Lori deserves her place among the game's greatest participants.

Lori's comments: Wow, this is pretty cool. :) I honestly didn't think I'd have been chosen for this. I'm a rather controversial player as it is, and there are a lot of other players who probably should be up here as well. ^_^ I suppose all I can really say is that the voodoo doll of Scott, the Hail Marys, and all the shrines I've been leaving offerings at have finally paid off. I can't remember how exactly I started playing, I think it might have been Ed mentioning it in passing. It started off with wanting to support Scott on his endevors, plus it looked pretty fun. Plus, there was Bruce Lee -BRUCE LEE ... he's cool. I actually have quite a bit of a competative streak in me. That combined with how fun (and addicting) this game is what I guess has kept my interest in it for so many years. Mostly though It's just plain fun. Scott is correct though, as time progressed it became less of a contest (for me at least) and more about the challenge of guessing the goo. Since it has gone daily, the challenge has intensified greatly as well. I started requesting goos mainly to give Scott a little bit of a break. I can\t imagine how he has the energy to constantly come up with new entries, goo them, and write clever little clues. Thats a lot of work, and for it to take place on a daily schedual -wow. Thank you Scott for creating this game and site. And thank you for the never ending patience you've shown and for inducting me into the Hall of Fame this year. :)