This article was written in February 2014, when Joanna was originally inducted to the Hall of Fame, at a time when there was only one inductee per year. In February 2020, her year of induction was retroactively changed to 2011, her first year of eligibility. 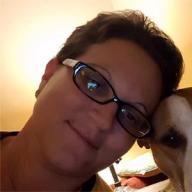 Russ Wilhelm's determination. Justin Woods's competitiveness. Denise Sawicki's consistency. Mike Eberhart's sportsmanship. Steve West's raw talent for the game. These qualities and more have defined some of Celebrity Goo Game's greatest players, but they are all qualities present in 2014's overdue inductee, Joanna Woods. Consistently playing and solving most of the goos since her debut in August 2005, Joanna has racked up nearly 1700 correct guesses, one of the game's all time top scores. Her single longest unbroken streak of 56 correct guesses in a row has been surpassed by few other players. And yet, for as long as she has kept on playing the game so well, Joanna has been modest and quick to congratulate other players on their victories, especially her husband Justin and stepfather Russ. It's long past time that her own praises have been sung, as she has earned plenty of recognition herself as one of the game's best and most skilled players.

Joanna's excellence at the game is not occasional: She consistently comes out near the top of every season. In the timed bracketed tournaments that have scored the game from 2010 to 2014, she has almost always been among the final four contestants vying for victory, outlasting a wide field of competitors. She has won the game both quickly and slowly: Her triumph in 2007 by solving a goo in Esperanto was swift and decisive, clinching victory on only the fourth day of the tournament, but in 2014 she had to grind down her opponents over a long endurance test, lasting three difficult weeks and ultimately emerging triumphant with another obscure historical goo. It's not uncommon for other players to fear seeing her name opposite theirs in a new day's bracket: Her swiftness at timed goos has awed other players who were quick to salute her after she defeated them. Joanna has earned this good will in part by being so kind herself, frequently congratulating and praising fellow players in both Celebrity Goo Game and Rock Block. By meeting new players at GooCon: Villa Ridge in 2011 (where she consistently finished in the top half of each season, incidentally), she made a positive personal impression on Chris Lemler, Erik Bates, Jackie Mason, Kelly Lee, LaVonne Lemler, and Scott Hardie that would go on to inform her experiences on Funeratic.

Just as it has become difficult to imagine a timed tournament where Joanna doesn't fight her way into the final four again like she seems to do every time, it's all but impossible to imagine a Celebrity Goo Game since her arrival in 2005 that doesn't include her presence. Joanna's name has so often appeared in the list of finalists, and her face has shown up so often on the list of top scorers, that it's easy to forget that's she not there automatically: She works hard to grind out an answer to every last goo and brings her fiercest A-game to every last competition, and nine years of that level of effort deserve commendation. Here's to Joanna Woods, one of the players most accomplished, most outstanding, and most deserving of appreciation in Celebrity Goo Game's history.

Joanna's comments: I am so excited!! I have enjoyed playing and meeting everyone so much.