Rock Block's summer 2022 tournament draws inspiration from the 1983 anti-war hit "99 Luftballons" by the German one-hit wonder Nena (re-recorded a year later for English-speaking audiences as "99 Red Balloons" with apolitical lyrics). Just as the army generals in the song lyrics thought they were staring down each other's forces and had to decide whether to attack or restrain themselves, so too do the players in this tournament have choices to make. With each victory, a player can either pop one of their own 99 balloons, or pop another player's balloon to trigger two additional concerts for double the chances to win. The first player to have no balloons remaining will win and receive a prize!

To join the tournament, first join Rock Block. For more information about the game, see How to Play.

When a player wins a concert, they may pop one of their own balloons below, or pop another player's balloon to spawn two additional concerts. 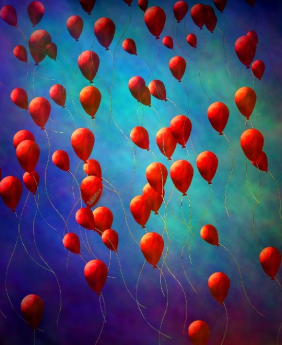 Concerts: "99 Luftballons" tournament concerts will be started automatically. Every hour, a background process on the website will spawn a new concert between any two active players who are not already playing in any tournament concerts. If there are not two such players available, no concert will spawn. In these automatic concerts, the challenger and defender will be randomly assigned. The Overtime play rule will ensure that there are no draws, but the other play rules and the artists in each concert will be randomly selected based on what each pair of players has available to them. These concerts will use the None trade rule and expire after four days of inactivity. Winning or drawing in these concerts will not result in ranks of new artists in the Collection Guide, since participation in the tournament already does so (see Prizes below), but they will count towards achievements such as "win fifty concerts."

Balloons: Upon winning a tournament concert, you may come to this page to get your reward. Near the top of the page, you will be invited either to pop one of your own balloons, or to pop one belonging to another player. If you choose the latter, two concerts will be spawned instantly: One in which you are the challenger and that player is the defender, and another in which you are the challenger and a random other player is the defender. Like the automatic concerts, these will use the None and Overtime rules and will otherwise have their elements chosen randomly, and will conclude after four days of inactivity.

The champion will receive a $99 Amazon gift card by email and a small trophy.

Every participating player will receive a copy of Nena in their label, and unlock the Overtime play rule if they don't have it already.

A "participating player" is defined as playing at least one turn in a "99 Luftballons" tournament concert.

These are all of the times that a player popped a balloon in chronological order.

These are all "99 Luftballons" tournament concerts in chronological order. Bold titles are still being played.