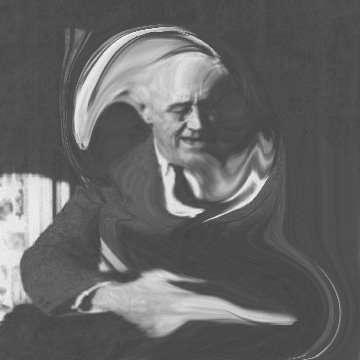 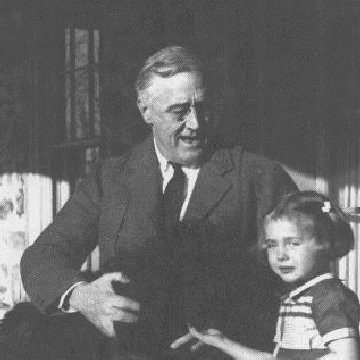 clue: Frankly, this relative of a Clinton advisor should've gotten off his ass more often.

explanation: This goo was an homage to Eleanor Roosevelt (0003), an early goo that was extremely difficult. That clue referred to Eleanor as a Clinton advisor, so Franklin is referred to as her relative. The word "frankly" is a play on his first name. He "should've gotten off his ass more often," but he was, in fact, confined to a wheelchair because of polio. more…

trivia: This clue, making fun of Roosevelt's condition, ranks among the meanest clues in the game. The girl in the photo with him is Ruthie Bie, granddaughter of the caretakers of his vacation home. The Scottie dog is Fala.

This former mayor of St. Charles is a center of cultural arts. Go »

Eureka! I was going to say something about drafting salt, but I forgot... Go »