A List of Things That Tick Me Off
by Adrianne Rodgers on August 18, 2006 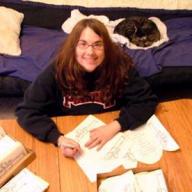 1. Crusty old binnies who accuse the current generation of being selfish as they don mink coats and drive down to Florida in Lexus convertibles with lambskin seats.

2. Giving a bum some money just to shut him up, but then he starts spouting wisdom as if anyone has ever gained insight from some irascible vermin who lives in a cardboard box and hasn't seen a roll of toilet paper in three decades.

3. Miserable mailguys who piss and moan about their jobs, then when they get fired and should be exulting in their freedom, instead decide to pull out a revolver and start shooting every mailbox and human being in sight.

4.Hypocritical cops citing the potential for testicular cancer from leaving radar guns in their laps, but thinking nothing of firing the tumor-causing musket at our brains as we whiz by them on the highway.

6. The pathetic control on Porta-Potties that allows you to tell others that it is 'not vacant' as if anyone stupid enough to use the rancid apparatus has anything above a second grade vocabulary.

7. Honking the horn at some old goat, and the guy's so out of it he waves hello, as if a hello toot is ever a three minute horn blast, followed by a middle finger and a death-defying pass along the guard rail.

8. People who put up CAUTION: BLIND DRIVEWAY signs, as if the people driving by should be careful because this total dingbat purchased himself the crappiest house on the planet.

9. Lamebrained joggers continueing to run in place when you ask them for directions, as if you can hear a word they're saying when their feet are scuffing the ground, and they're sucking in air like they've had their head dunked in a toilet for five minutes.

10. Trying to play a game of tennis and dodging balls from the physically impaired nimrods in the next court who keep lining felt balls at your head and encouraging each other by saying 'That was a really close shot.'
11. Overly cautious lardbutts pressing the walk button when there are no cars around for miles, so by the time you drive up, you still have to stop and watch him haul his gargantuan rump across the street.

12. Mushbrains borrowing a book and reading it in a steaming hot tub, then returning it as if you're ever going to be able to peruse the mildewed stack of deformed pulp again.

13. The numbskulls working at the ticket desk who think they can make flying safer simply by asking every passenger if they have plans to hijack the plane.

14. Licking batter off a knife and suddenly wondering why vanilla frosting tastes like blood and has the consistency of a tongue.

15. When the newlyweds at a wedding party finally make their way to your table to say 'hi' after four agonizing hours of making small talk with the plethora of bungleheads you're sitting with, and two seconds later the lovestruck pinheads are gone and you don't see them again for half a century

Adrianne Rodgers complains about life and all its little nuisances. Read more »

Goths vs. Emos...this isn't going to win me any friends in the high school set.... Go »

The Black-Eyed Peas Must Be Stopped

Seriously. We've all heard that "My Humps" song they put out. The first time I heard it, I refused to believe that it came from the Blackeyed Peas. Go »

Can we please, *please*, give these stores a break people? There's no need to get all up in arms over the fact that Walmart and Target are greeting people with, gasp!, "Happy Holidays" instead of "Merry Christmas." Go »

I Got Tuna Fish In The Mayonnaise

Which is far worse than getting jelly in the peanut butter. The spot of tuna has begun to fester and spread, leaving a repulsive brown stain. Lunch is ruined. Go »

From the looks of things, you'd think it takes an advanced degree to refill an ice cube tray. I guess if I don't want to spend the next half hour skimming ice slivers off of sluggishly freezing cube slots, I might as well just go out and buy a ten pound bag. What do you mean, I'm the only one who lives here?!?!? Go »

The United States of Walmart