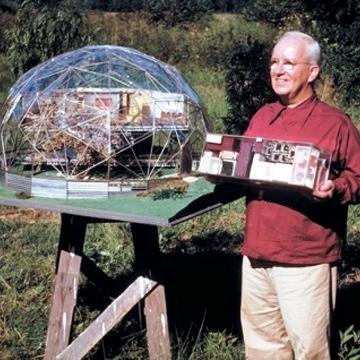 clue: Somehow, this ordinary man got it into his dome that we need to do something to save this spaceship we're on.

explanation: Fuller devoted his life to rescuing "Spaceship Earth" (his term) as an ordinary man. His most famous invention was the geodesic dome. more…

Don't run around like a cliché if you can't solve this freak-show goo. Go »

When you're fighting to save a life, don't miss the forest for the tree. Go »

While working late upon a goo, I tried to write an eerie clue referring to a falling house, but then I heard a tiny mouse, or so I told my beating heart as not to have it break apart, afraid that just a little breath would bring upon a crimson death from that which tapped inside my room where I now feared a certain doom, so scary were those growing knocks I felt quite trapped inside a box beneath the earth outside my door, where I was sure forevermore my murder would remain unsolved, unless the open case revolved around a single stolen note I somehow found the time and wrote, to warn about the urgent noise that kept me from my website toys, but then I realized like a fool that what had made me lose my cool was just my fingers spelling out this clue to tell you all about a Boston poet, tried and true, whose tangled rhymes became a goo, and just in time to set the scene for scary goos this Halloween. Go »