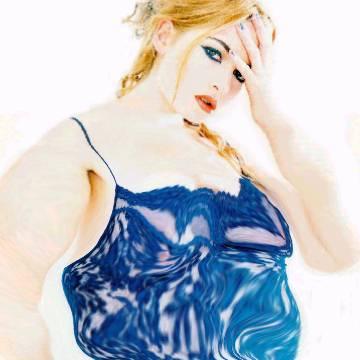 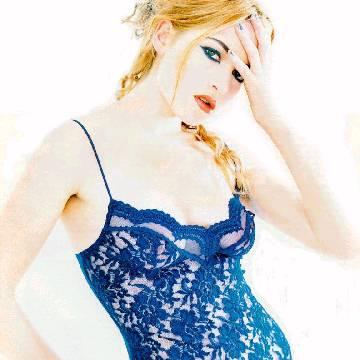 explanation: Winslet starred in the movies "Holy Smoke" and "Titanic." She has a larger figure than many young actresses, and has been ridiculed for it, including being called a 'fat cow' in some media. more…

trivia: Back in January of 1998, when "Titanic" was escalating in popularity, dorm roommates Matt Preston and Scott Hardie were debating Winslet's size. Matt claimed that she was fatter than most young actresses, while Scott claimed that she was normal weight for a woman. For fun, Scott imported a photo of Kate Winslet into Matt's copy of Kai's Power Goo, a program that he'd been toying with on Matt's computer for a week or two. He stretched her figure until she looked very fat, and the joke was worth a few laughs. The historical significance is that Kate Winslet was thus the very first celebrity goo. The Celebrity Goo Game began a month later, on February 24, 1998. (This goo is not the 1998 image, but a recreation of it.)

Size apparently does matter when you're taller than Tokyo skyscrapers. Go »

A Jedi knight, a Bohemian playwright, and a heroin addict all have this Scottish actor in common. Go »

it all started with a plumber jumping over barrels