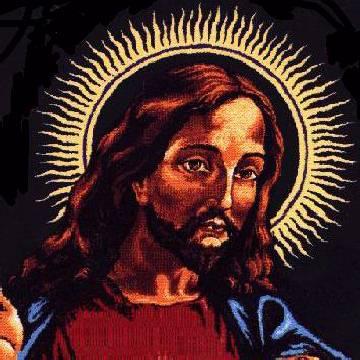 clue: There aren't any sins of His father, but He's still cross.

explanation: One of the best definitions of "celebrity" in the world (except possibly for John Lennon and his band), Christ was a prophet who claimed to be the son of God. The religion of Christianity is based on him. God is presumably perfect and without sin. The word "cross" refers to Christ's death, when he was crucified at Golgotha. more…

trivia: Of all of the possible image sources in the world, this picture comes from the cover of the Blitzspeer album "Blitzspeer Saves." In the full album cover, Christ has a comically exploding pair of checkered flags on his red tee shirt, joined together in the middle by an angry-looking skull and crossbones. This may symbolize Blitzspeer's (and possibly Christ's) love-hate relationship with professional racing.

This stoned pilot can really weil those tunes. Go »

The Vatican City doesn't seem so far away from Buenos Aires any more. Go »

This OSB monk taught that within all religions there is a fire below. Go »