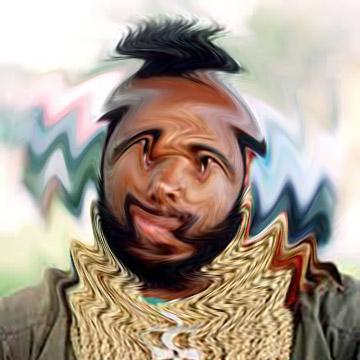 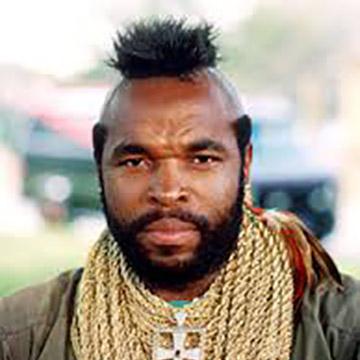 clue: Longtime fans of this on-screen boxer and mercenary must have been thrown for a loop when he gave up his signature gold chains. I pity the goo!

explanation: Mr. T, known for playing a boxer in Rocky III and a mercenary in The A-Team, gave up wearing his gold jewelry after volunteering in the aftermath of Hurricane Katrina, saying that an ostentatious show of wealth was un-Christlanlike of him. more…

trivia: Mr. T (2000) was the 100th goo. At the time, the game only published one goo per week, so reaching #100 felt like a landmark worthy of something special. I was inspired to pick Mr. T because of a silly page about him on my website at the time, and from then on, a tradition began of doing something special for landmark goos: The 200th goo was Kate Winslet (an in-joke that inspired Celebrity Goo Game), the 300th was Kai Krause (creator of Kai's Power Goo), the 900th was Ozzy Osbourne (a callback to the game's early days), the 1000th was Goo, the 2000th was Johnny Rzeznik of the Goo Goo Dolls, the 3000th was Goo Hara, and the 4000th was Guccio Gucci, with other occasional one-off goos like the 666th goo being Anton LaVey. –Scott Hardie